Intro: Can Shamans tank? The short and to the point answer is, yes. You might be rubbing your eyes in disbelief of this answer. Maybe conjuring a ten page manifesto about how only warriors can and should tank. Although, I can go on a long rant about how there are many other classes that can tank, today, I’ll be focusing on our totemic friend, the shaman. 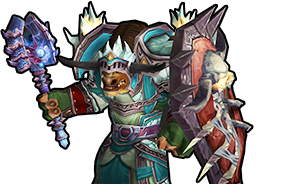 The topic of viable and optimal is contentious as some don’t see the difference or mix them up and levy a misguided philosophy onto it. Optimal is the most efficient and foolproof solution that eliminates as many negative variables as possible and favors an easier path. Viable or often referred to as: possible, seen as the more challenging path but to many is a greater personal triumph. Shaman Tank is labelled as viable.
Many Shaman tanks agree their motivation is from the glory of seizing a feat the rest of the realm dares not try. If this resonates with you, please continue reading. You shaman tank if you want a challenge and a refreshing perspective from a 15 year old game. If it wasn’t obvious before, shield bearing is a sizable undertaking.

When experienced players Shaman tank and put in the effort, it shines tenfold. Shamans can fully tank 5mans, 10mans, off-tank & main-tank raids. But, this is reliant on personal and guild experience. Our overall defensive statistics won't reach a warrior’s. However, it isn’t necessary to do so, to tank.

You’ll be staring at your character for a long time. So, consider your character’s appearance as a key factor as it may entice you to play more. All races have benefits but they’re minor compared to other aspects. In skilled hands, a Troll's Berserking can save your life and improve threat. Tauren excel at dungeons followed just behind by Orc.

Allies can reduce their threat, through items, ex: Fetish of the Sand Reaver. Mage have: Invisibility & Burning Soul. Warlock: Soulshatter. Paladin: Hand of Salvation & Hand of Protection (prevents aggro). Hunter & Rogue redirect threat: Misdirection and Tricks of the Trade. (see More). They can wipe threat: Vanish & Feign Death. Masterwork Target Dummy can "pseudo- Taunt" up t'ill a lvl72 elite mob. Classes in the 30-40 yard range won’t get aggro t'ill they surpass the threat level of the mob’s current target by 30%, as opposed to 10% for melee classes.